Gatsby: The Dream
And nothing but the dream
This is a poem that Jay Gatsby could have written to Daisy Buchanan in the shape of a dead, wilted flower. It doesn't have to necessarily be a daisy, but... d'you get my drift? (pictures at the bottom)

It starts out as a sort of hopeful memory, and Gatsby continues on to say that he wants things to be the way they were before the war. Then in the end, Gatsby feels hopeless and he realizes that his quest for Daisy's love is over.

Inspiration was taken from Gatsby's memory about his and Daisy's first kiss (pg. 110). He talks about the bright moonlight, his heartbeats, and Daisy's beautiful face. He remembers the first kiss as if it were yesterday. The most important quote is "At his lips' touch she blossomed for him like a flower and the incarnation was complete" (110). The flower in the concrete poem is shown to be growing at the stem. As we travel up the stem, the flower wilts, and the hope and possibility of mutual love dies along with the flower.

When Daisy tells Gatsby "You look so cool... You always look so cool", she basically tells him that she loves him, and Tom is finally aware of what has been going on (119). Gatsby later bravely declares to everyone that Daisy never loved Tom. But with that declaration, he has removed all possibility of their reunion. Realizing this, Gatsby has simply lost all hope.

There is indeed color symbolism:
- "yellowing in my eyes" shows that corruption has come upon Gatsby. His own convoluted mind, so wrapped up in his desires, hurts others. Also, the eyes of the deathly sick turn yellow, and we thought it would add a foreshadowing element, in a way.
- The blue water, once the only thing standing between Gatsby and Daisy, has turned gray and ugly. It is destroyed. There is now more than that in the way, such as lies and pain.
- White and black- what was once innocent and pure has become tainted. Daisy and Gatsby's love, once so free and open before he left, has only become a tangled web of lies.
- The green- it represents hope. There is no more hope, the "green" has dried up and become dead and dusty.
- The red- there is no more passion left to feel.

(see under pictures for poem text) 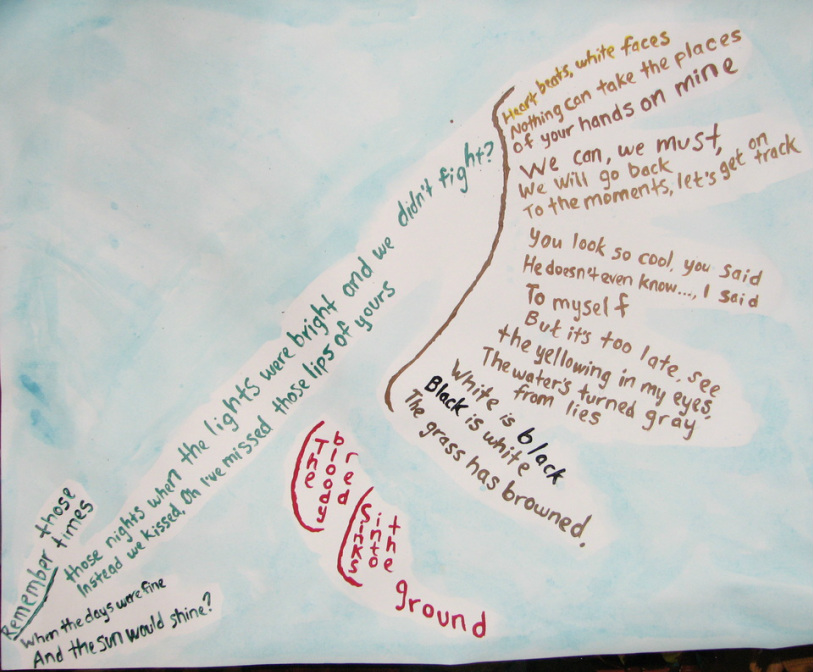 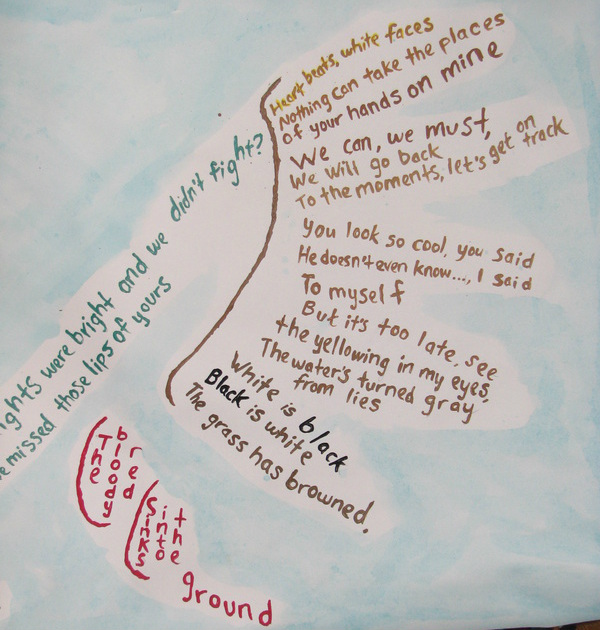 Remember those times when the days were fine and the sun would shine?
Remember those nights when the lights were bright and we didn’t fight?
Instead we kissed, oh I’ve missed
Those lips of yours
Heart beats, white faces
Nothing can take the places
Of your hands on mine.
We can, we must, we will go back
To the moments, let’s get on track.
You look so cool, you said.
He doesn’t even know,
I said
To myself,
But it’s too late,
See the yellowing in my eyes,
The water’s turned gray from lies,
White is black,
Black is white,
The grass has browned,
The bloody red sinks into the ground.
Powered by