Gatsby: The Dream
And nothing but the dream

The foods in the little party of Jay Gatsby's mansion represent the 1920's 'American Dream'. Although these dishes and desserts are lavishing with exotic ingredients, it personifies the abundance of corruption the characters have in The Great Gatsby. "On buffet tables, garnished with glistening hor d'oeuvre, spiced baked hams crowded against salads of harlequin designs and pastry pigs and turkey bewitched to a dark gold." The foods in the book often are described with seasonings and presentation rather than the quality of taste. Parallel to this, the foods that are mentioned above are spiced, well decorated, and has a splash of olive oil for the elegance of the party. Contrary to this however, are the fanciful garnishes that represent the characters' hidden flaws. Behind all of the fortune and glamour is the true identity of each character. Gatsby's true self in reality is his origins of his wealth, where he deals with selling illegal alcohol business. This background is hidden by his luxurious lifestyle and the glamorous world that he lives in. In addition to this, the dishes are well garnished, which represent the yearn for worldly desires and materials of each of the wealthy yet hollow characters. With the deception of possessions, Daisy betrays Gatsby and runs off to Tom Buchanan for the gold. The Great Gatsby reveals the American dream which is filled with desires of material and unfulfilled dreams in a world with unlimited wants. The menu depicts these aspects in its process and presentation of each dish. These gourmet and descriptive dishes, garnishes, and sophistication of the ingredients all play a part in the American Dream of the 1920's which thrive for luxury, pleasure, and exotic taste. 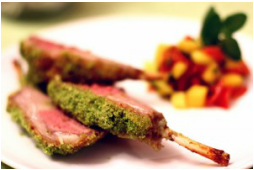 Although this dish appeals to the senses on the exterior, the interior is in fact unseasoned and frankly, raw. This dish represents the illusion in which Gatsby’s true identity of corruption and indulgence of money is sugarcoated by his fortune and luxurious parties. Rubbed with stale bread crumbs and grated parmesan cheese, the lamb itself is not as impressive inside as it looks on the outside. With thyme, parsley, coriander, rosemary, English mustard, and olive oil, this lamb is heavily garnished to represent the romanticized world that Gatsby has come to attain during his life. Gatsby's wealth, coming from an unlawful source, is often hidden due to his character being immersed in the pit of worldly goods. 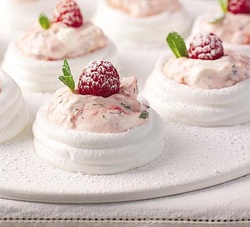 Also a character that has a desire for money is Daisy, who ultimately betrays Gatsby for her love of money, Tom Buchanan. Appearing to be beautiful in presentation just like Daisy, a meringue of egg whites will have no flavor to the tongue. The soft and delicate white foam meringue represent her vulnerability and indecisiveness of love. Although it catches one's eyes as a cooling treat on a nice spring day, the taste is not as appealing as it looks. With hidden bold flavors implemented in the center such as lemon juice, root ginger, mint, soured creme fraiche, Daisy shows her true side when she betrays Gatsby and also denying her murdering of Myrtle Wilson. 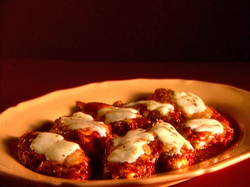 There is not much special about Nick Carraway. He acts as a mediator throughout the story and spectates Gatsby, Daisy, and Tom. Just like the simple comforting food of chicken parmesan in party sized bites, they are sure to bring a peaceful aura at the gathering. Just an educated man looking to learn the tricks and trades of the bond business, Carraway moves to New York to his new wealthy neighbor, Gatsby, and is suddenly a part of the drama that is amongst the hollow rich. 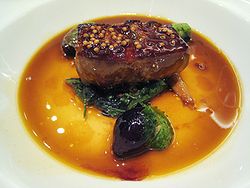 In France, the fois gras, is a liver of the duck which is fattened by force feeding it corn with a gavage. Although it being extremely expensive and a delicacy, a liver will always taste like a liver no matter how much it’s seasoned, horrible. With its unappetizing method of preparing this dish of animal cruelty, it appropriately portrays the cruel lifestyle that the characters in The Great Gatsby are living.  Highly renown for its already fattened liver, more oil is compounded to it. This retains the somewhat mild flavor that the liver has. Just like the liver, Buchanan cannot break out of his arrogant personality and fails to even be a mature millionaire. With his jealousy like no other and no morals, Buchanan's true self is  revealed in his anger in the midst of the delicate lifestyle he chooses. 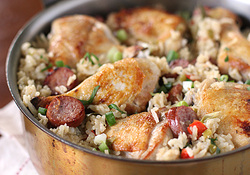 With spicy seasoning after seasoning, and garnish after garnish, this mess of a dish is a Jambalaya. Originating from the Spanish Paella, the Jambalaya is made with miscellaneous leftover vegetables and meat that is mixed with rice. Ultimately, this quick and easy dish can often turn disastrous. Just like the plot in The Great Gatsby, this dish represents the demoralization and mess that the 1920's is in, depicting the tainted American Dream. With spices and garnishes that cover up the taste of all the vegetables and meats that are mixed in with the overall dish covers up the true taste of them that stand alone. 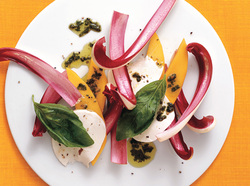 The mangoes take the place of tomatoes, which are usually in a typical salad. The mango represents the quite often romanticized and saccharine life that the characters live, but with the dish not even looking like a salad and the unappetizing combination of large chunks of mango, radicchio, and mozzarella, the characters fail to live a normal and peaceful life. Even when they live an epicurean lifestyle, they lack the basic foundations that humans need to be equipped with, one of which being morals. 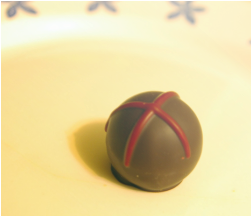 Edible truffles are held in high esteem in the haute cuisine world, yet the question of whether the taste "haute" to be as appealing. Although it is commonly known as the diamond of the kitchen for its rarity along with price, the truffle is cultivated from the dirt ground by a truffle hog or a truffle dog, just like Daisy being a gold digger for Tom Buchanan. Only the female hogs are keenly attracted to the sex pheromone of boar saliva of truffles and are an issue due to the hogs intentionally and immediately devouring the truffle when it is found. This animal like behavior in not having any restraint or self-control clearly depicts the unlimited wants that Daisy tries to acquire.
Powered by